How easily we learn a new language depends on many different factors, but does a person’s gender play a part? Results from TOEFL tests and extensive surveys from Education First  all indicate that females outperform males in English language tests. So why is that?

Current research on how men and women learn a language appears to show that females do have a real advantage. A number of reasons have been put forward for the gender difference. 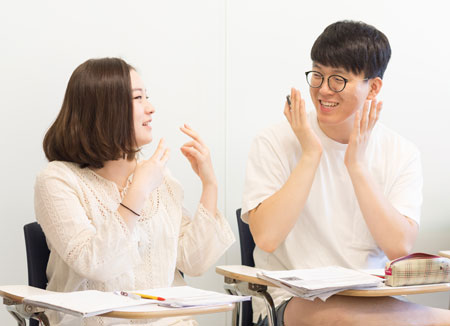 Studies have shown that there is a difference in the way males and females process language in the brain. The left side of the brain processes analytic and logic functions whilst the right side controls visual, oral and non-linguistic functions. Experiments show that women use both sides of the brain when they talk and men only the right side. Females are able to utilise the analytical side of their brains to help decode language whereas their male counterparts need more sensory input.

Studies from Europe, Asia and Latin America all point to the way females learn languages in a more holistic way. Females tend to take a stronger interest in the culture, the country and the speakers of the target language. Their studies employ all four key skills (reading, writing, listening and speaking) and language elements (vocabulary, grammar etc). Male peers generally keep to a narrow range of familiar study methods. However with the increase in freely available digital resources such as podcasts, language apps and websites, this situation may well change.

Most of us would probably not disagree with this statement, but why is this so important to language learning? It seems that women are better communicators and build more social connections than their male peers. And it’s through these connections that women get more opportunities to practice their listening and speaking skills. They are able to ask questions and get answers to reinforce their comprehension of the target language. The friendships that result often give even further motivation for language learning. Of course, not all women are talkative and not all men are reticent, so undoubtedly some males also benefit in the same way from having good social skills.

This is perhaps the most controversial of the reasons put forward for gender difference in language learning as it is more difficult to prove. This argument stems from how females and males react to studying in high school. From studies in the UK, Canada, and Hungary, it seems that female high school students are more likely to take up or continue language studies than their male peers. Some researchers argue that this is because both boys and girls view languages as being female subjects, with boys opting for more male dominated subjects such as maths and physics. Often this perception is backed up by the predominance of female language teachers who thus act as role models for girls.

Clearly all of the reasons above are based on broad generalisations. But if you are interested in finding out more you can check out the results of the Education First survey. Students from 70 countries took part and in every case females did better in the English tests. We can all think of  at least one male friend or acquaintance who can speak two or more languages fluently. So whilst gender is a factor in language learning, it’s not considered the most important. Men too can make great language learners!

In previous articles we’ve looked at other factors in language learning including this one on learning a language as an older student.