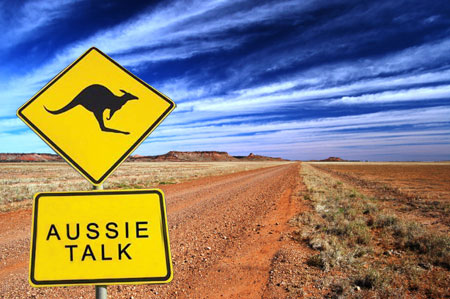 All languages use diminutives, shortened versions of the original word. We may use them to show affection or perhaps because we want to sound less formal, more friendly. Some diminutives may even be seen as slang. One of the quirks of Australian English is the wide use of them. There are over 5000 known expressions, far higher than in British or American English.

Take a look at the following invite from an ‘Aussie’ friend. Would you say yes?

‘What are you up to s’arvo? Straya are playing footy against the poms on the tellie. I’m having a barbie. We’ve  got snags and loads of stubbies and don’t forget your cossie.’

Does it seem like an alien language?  Packed full of typical Aussies diminutives, it may at first be hard to understand. We’ll take a look at some of the most popular ones and help you unravel your baffling invite.

Our Top Diminutives In Australian English

How many of the following do you already know, or can guess at?

Just why are Aussie’s so fond of their diminutives?

It seems many Aussie diminutives have slipped into English dictionary. Who isn’t familiar with the terms ‘selfie’ and ‘uni’?

Are modern day Aussie’s just being lazy? No, argues Dr Nenagh Kemp of the Australian Geographic  Society.  She points out that Australians have been shortening common place words from the early 1800s and in some cases the diminutive version is actually longer than the original.  It seems that their use in more a cultural expression. In general, Aussies are often seen as laid back, friendly, open and welcoming. It makes sense then that the language they use would reflect that.  We hand over the last word to Dr. Kemp

“I think we all have an intuitive feeling that these words also make an interaction more informal, more friendly and relaxed.”