We are very pleased to welcome Jess Ge to the LSI team.  Jess will be working as the LSI Marketing co-ordinator in China and is based in Ningbo City, Zhejiang province. Over the last 13 years Jess has had experience of placing A-level students in top sixth forms colleges. LSI plan to utilise Jess’s knowledge to build up closer links for  LSI Independent Sixth Form College.  In addition, Jess will work alongside Chinese agents to place students on language courses  across all our LSI language schools.

One of Jess’s first tasks was to  attend ICEF Beijing alongside Seán Buckley, Principal of LSI Independent Sixth Form College. Seán and Jess were kept very busy during the ICEF workshops. First Seán gave a presentation on “Getting into Top Universities” which was translated by Jess. The talk was very well received by the audience. Then Jess and Seán met with over 30 local agents, who all expressed a strong interest not only in the Sixth Form College but also in the language schools.  Follow-up meetings with a range of agents have already been held, with plans for groups and individuals to attend our courses being made.

As a result of such positive feedback, Seán will return to China in early November. He will attend an international education event at Hangzhou Greentown School, a visit set up by Jess.  He will give a keynote talk on STEM education and will meet students at the school.  Hangzhou Greentown School is very international in its outlook and has a tradition of sending students to be educated abroad.

We all hope that this will be a very fruitful development for LSI. 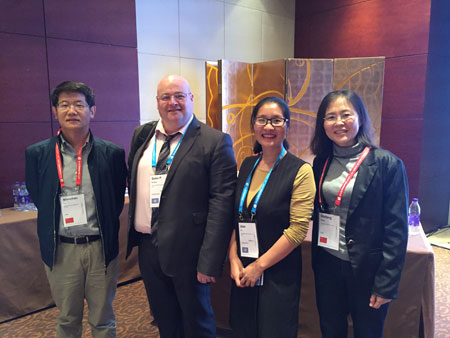