Most of us, at some point in our lives, will indulge in a spot of  ‘binge drinking’. Perhaps some of us will be lucky enough to have a  ‘cushy’ job. Ever wondered when these modern English terms were first coined?

Recent research carried out by the British Library shows that many terms in current everyday English were first used in the tumultuous environment of the First World War trenches. British Library documents covering the period 1914-1918 unveil terms such as  ‘washed out’, ‘fed up’, ‘snapshot’, ‘bloke’ and ‘blind spot’. Many of these words reflect the soldiers attempts to convey the exhaustion and brutality of their existence in the trenches. Unsurprisingly the documents also revealed new euphemisms for dying such as ‘pushing up the daisies’ and ‘snuffing it’.

According to the British Library researcher Walker, “It was a very creative time for language. Soldiers have always had a genius for slang and coming up with terms. This was a citizen army – and also the first really literate army – and at the end of the war, those that survived took their new terms back to the general population.” 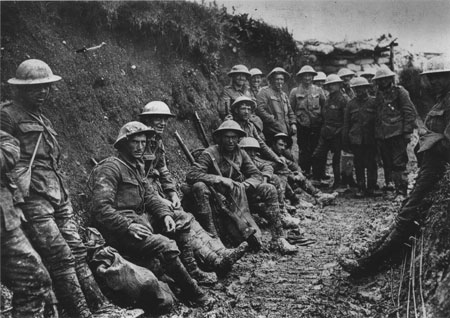 Read more on the Guardian.