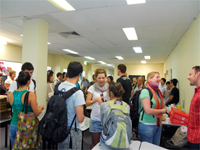 It has been quite an eventful month for all the staff and students at LSI Brisbane. There was world wide coverage of the recent floods in Queensland. Whilst the worst affected areas were a two and half hour’s drive from the city, small sections of the commercial district and some residential districts of Brisbane were also flooded. Fortunately none of the students were staying in any of the districts which were flooded and whilst the school was closed for a few days, staff kept in contact with the students and encouraged everyone to contact worried family and friends at home. As the school received no damage, LSI Brisbane was able to reopen as soon as the power had been restored. It seeems however that many students had been busy during their time off helping with the clean up operations that were going on all around the city.

Last Friday LSI Brisbane decided to throw a ‘flood party’ celebrate  the fact that all staff and students had come through safely during the flooding , as well as taking up a collection for those in other parts of Queensland who weren’t so fortunate. Students enjoyed a lunch of pizza, sandwiches and chips as well as chatting to other students and staff about their recent experiences. A significant amount of money was raised and this will be given to the Queensland Premier’s flood appeal. We’re happy to say that most of Brisbane has returned to normal infact it’s hard to tell that the flood has ever happened.